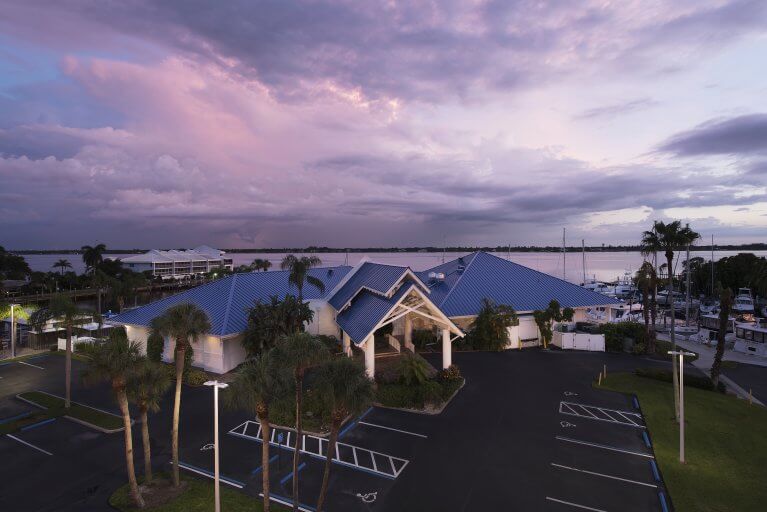 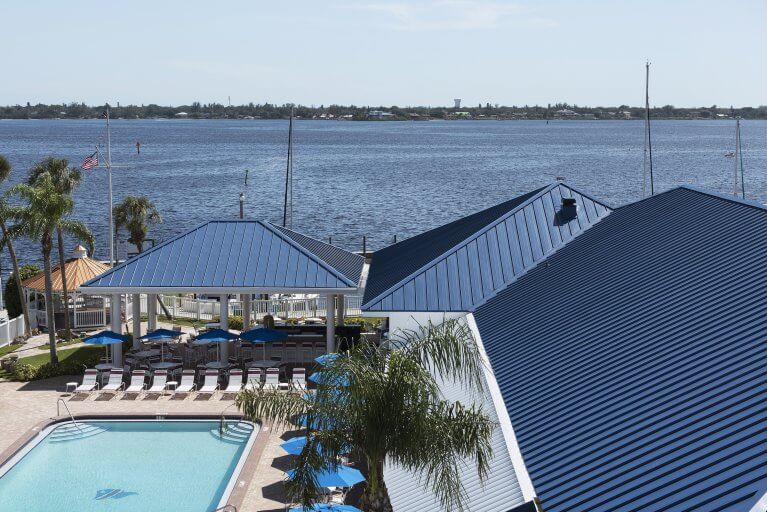 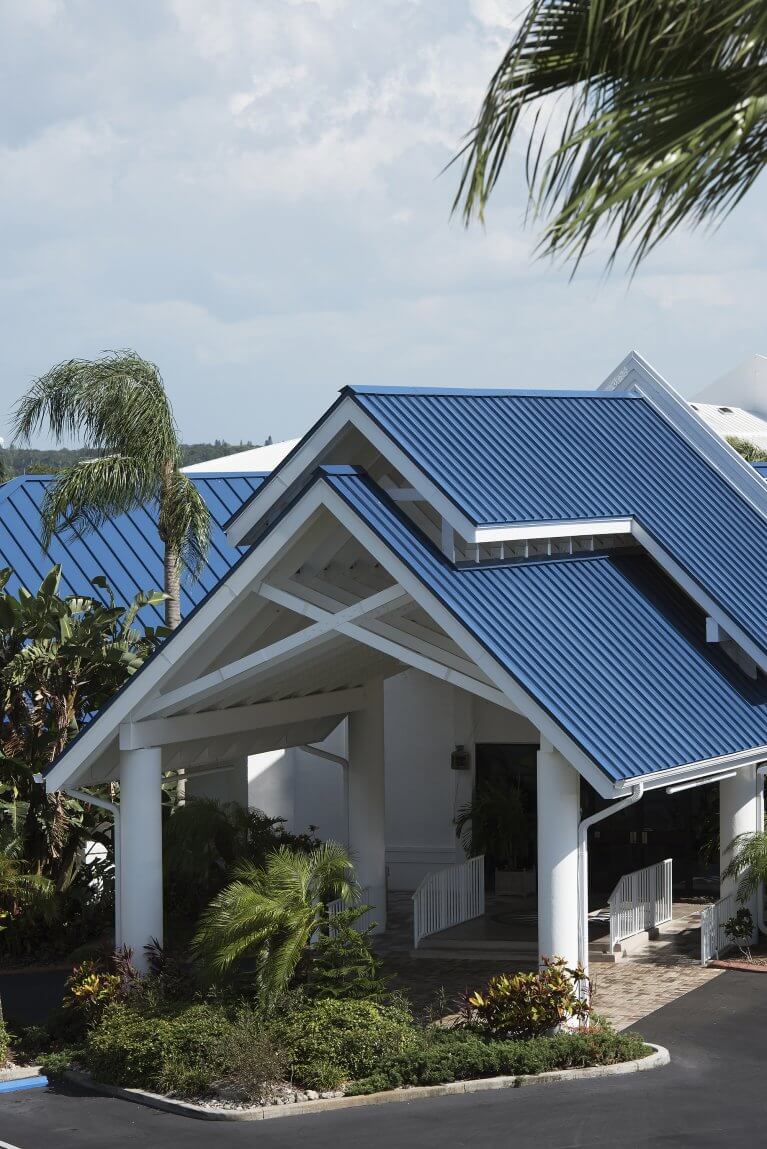 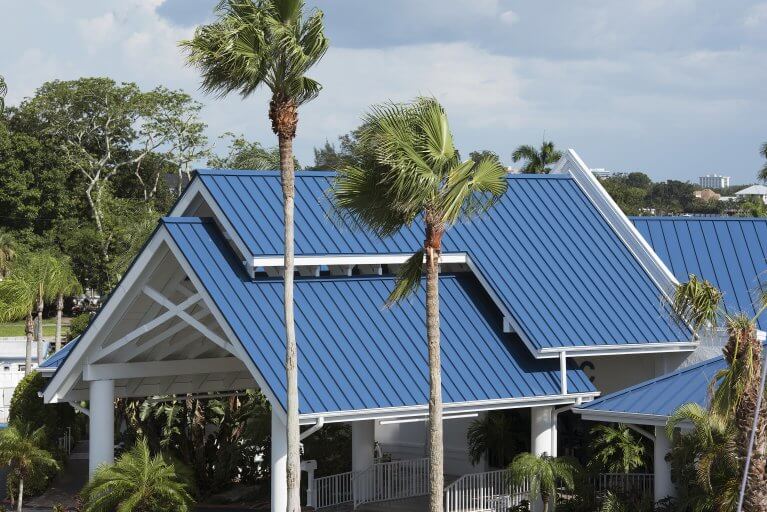 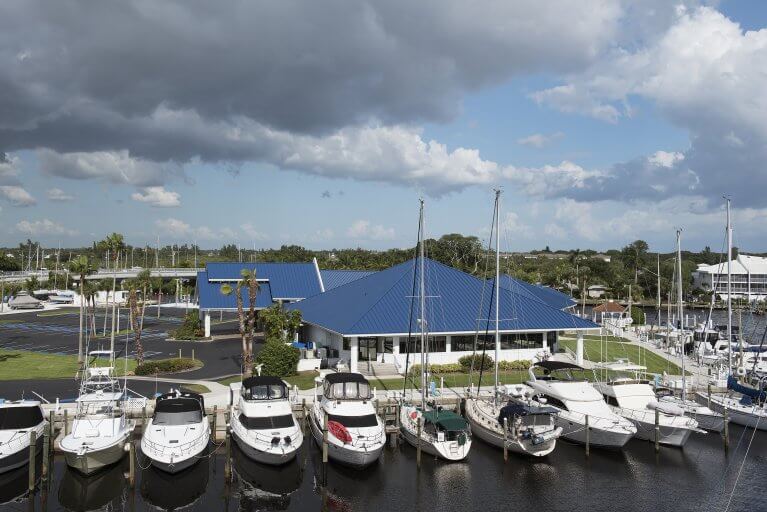 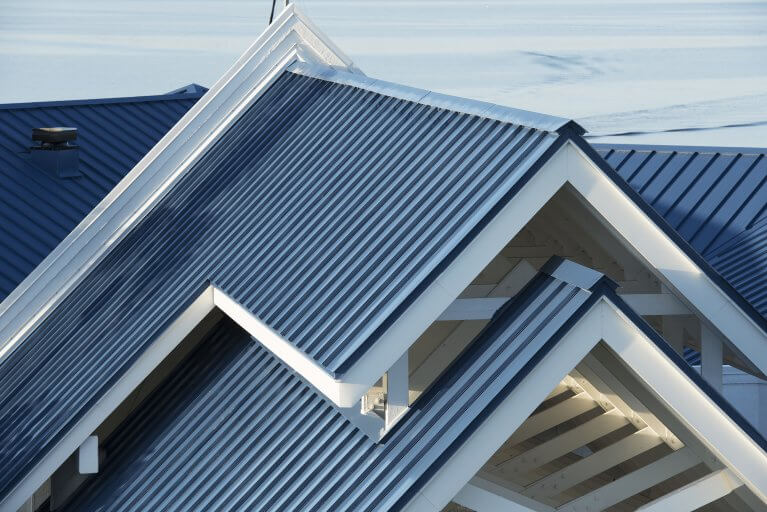 The new blue aluminum roof on the Bradenton Yacht Club in Bradenton, Fla., replaces an old, tired roof, giving the building new life. Removing the old roof was more economically sensible than repainting it, which would only delay its inevitable replacement.

More than 25,000 sq. ft. of Petersen's 18-in.-wide Snap-Clad roof panels in .040 aluminum were installed on the yacht club's main building. The panels were finished in PAC-CLAD color Interstate Blue and feature pencil ribs, which were expertly installed during a 2-month period by Crowther Roofing and Sheet Metal in Sarasota, Fla. The yacht club paid a little more for the roofing contractor's expertise, but was worth the investment, said Bill Wheeler, Bradenton Yacht Club's rear commodore and reroof project manager.

"Crowther is a professional company up and down," Wheeler said. "They were great, and a big part of the success of this job. They're a no-nonsense professional roofing company that gets the job done right. Plus, the job site was never a mess. I told Crowther the sports cars in the yacht club parking lot have expensive tires, and you don't want to buy any for our members, and they didn't have to because none of our members turned in a nail for tire replacement."

Crowther Roofing and Sheet Metal tackled the building's steep slopes using snorkel and boom equipment. The equipment also was used to deal with limited access to the rear of the building due to its location near the marina, as well as landscaping, said Kevin Callans, president, Crowther. "This was a steep building with some strange configurations so we encountered some issues with taking off the existing roof and putting the new roof on. We're fortunate to own equipment that allows us to access these types of jobs with challenging site issues, and our cranes and high-reach machines allowed us to perform successfully. Fortunately we have good people that are skilled and safe and willing to get the job done. Two months for this job was about right."

The Crowther team pushes metal roofing whenever possible, Callans said, "because it's the best product and longest lasting in this part of Florida. We chose Petersen for this job because of their availability of aluminum, and aluminum simply was the best option for the close proximity to saltwater. Snap Clad is a friendly product for reroof applications because it allows for undulating in aging decks. As long as conditions allow for use of Snap-Clad, we push it."

The decision to buy a new metal roof was straightforward, Wheeler explained. "We knew that metal was the only product that would address our main concern, which was holding up in a hurricane with winds of 140 mph or more. We went with standing-seam heavy-gauge aluminum because that was the best option," Wheeler said.

"I also did a lifecycle cost analysis and determined that a new roof would cost us less over its lifetime than maintaining the existing roof," Wheeler said. "Repainting it would have worked, but every three years it would have looked bad and would need to be addressed again. Plus, immediately surrounding our building are many white boats that cost between $300,000 and $1 million each, and there was no way we would allow any kind of spray-based repainting job near those boats. Anyway, after a repainting we'd have to mess with the old roof for another two years before ultimately coming to the conclusion to buy a new roof. So, we just did it now rather than later."

The old roof generally was in good physical shape considering it was steel and the building is near saltwater, Wheeler explained. In the old roof's 27 years, it had faded to a light blue, including wearing down to the gray primer in some places. "We saw spotty rusting, and were having some issues with leaks, most of which weren't related to metal such as flashing points. I went up there one day and noticed a vent hatch coming up and a very poor caulk job. Most of the problems were issues like this."

The yacht club spent a year looking into roof replacement. "We looked at every coating there is, and our main concern was appearance. Previously we had a blue metal roof, which was installed in 1990. We chose Interstate Blue because it's the darkest blue Petersen sells, and because of yacht club tradition," Wheeler noted. "Blue roofs are a yacht club tradition of sorts, at least on the East Coast. Some clubs don't do it as enthusiastically as we do and only use blue trim. If we were going to have a bright blue roof in Florida, we wanted buy it from a company like Petersen that uses a quality paint coating."